A Pledge To Work Together in The New Year And Beyond 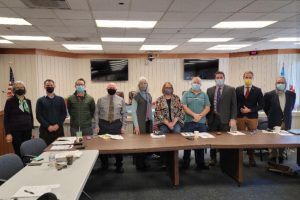 It could be described as a historic meeting held last month between the city and county leaders, as Hawkins estimates the two sides have not actually sat down for several decades. Their relationship became especially strained when the two sides decided to end the Tuolumne County Economic Development Authority in 2019, as reported here. Working with Hawkins to make this meeting a reality was District 2 Supervisor and Board Chair Ryan Campbell.

“This meeting that we had was a culmination of a yearlong effort of building bridges, increasing communication, and collaborating on areas where we share the same values and share the same interest, remarked Campbell. “I’m really proud that we were able to get to this point. It took a long time and it was a lot of work.”

The main topics at the meeting were homelessness, Greenley Road extension and revenue sharing. The latter has not been discussed since an agreement was brokered in 1991. Hawkins instructs, “In short, what we were receiving from the state money doesn’t exist any longer and certain benefits the county was getting doesn’t exist. So, we need to go back to the drawing board and find out what is fair and right for both entities.”

The Washington Fire that broke out in August is a good example of shared expenses and services provided by the city and county. While no deal was struck at the meeting regarding revenue sharing, it will be an ongoing discussion, according to Hawkins. He added. “Many times, when you rewrite your revenue sharing agreements you suddenly get reimbursed, things fall into place financially. It’s essentially having a better financial plan and we both want that.”

For Campbell the key issue is homelessness, stating, “We have to work hand and hand to resolve some of those issues. I really don’t think there is any way forward for the county or the city without us working together on the homelessness issue.” 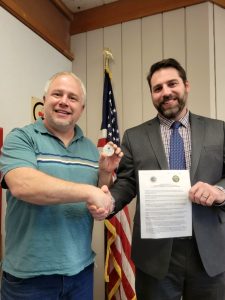 Noting the difficult year it has been for both, Campbell presented Hawkins with a “Challenge Coin,” as pictured here. He described it as a promise to continue building bridges and relationships while working together into the future.

“The meeting we just had is not the end it is just the beginning,” asserted Campbell. “That was sort of the start but it’s going to be an ongoing conversation just like any family, you have to keep the lines of communications going. So, what we did was committed to having at least two additional meetings every year.”

Both men agreed the meeting was a success, with Hawkins declaring, “It was more than productive…I know going forward we’re going to disagree on things but at least it can be amicable. Now, instead of constantly in a fight or a point of contention. If there is an issue, we can get along a lot better on this.”