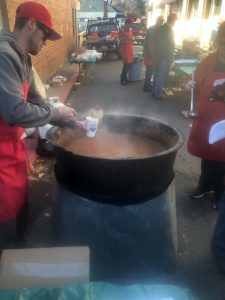 Sonora, CA-Crowds were lined up early in downtown Sonora in eager anticipation of the annual Bean Feed, formally Muttz bean feed. A popular local event, this is the 33rd annual gathering that has filled people’s bellies with free food and good cheer. The event had a rare no-show last year as it joined a long list of canceled annual events due to COVID-19. The food made a return this year, but the annual community Pop Hudson Memorial Sing won’t be taking place due to lingering COVID-19 concerns. The iconic iron vat of beans is now cooked at Tuolumne County Sportsman, a group that has taken over the event ever since the founder Galen “Mut” Mutzner retired from putting on the event back in 2017.

The chili pot was steaming in the cool air as the traditional meal of a cup of beans, quesadilla, and garlic bread was served to a line of people who were chit-chatting and anticipating a cup of hot food, the recipe of which, remains a top-secret only known to a handful of people. Smaller crowds were anticipated but the organizers have hopes the community comes out in force.

A father who went to the Bean Feed as a child was in attendance with his own son, he told Clarke Broadcasting “I remember the feeling of community when I went to this event with my dad and it was one of the first things I thought of when I moved back to the area, I’m happy I can share this with my son”

The creator of the event, Galen “Mut” Mutzner, passed away earlier this year, information about him, the origins of the event, and more can be found here.