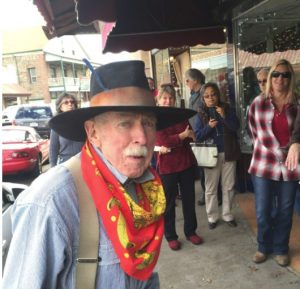 Sonora, CA — A beloved figure in the Tuolumne County community has died at the age of 94.

For 30 years, Galen “Mut” Mutzner put on the annual Mut’s Bean Feed in downtown Sonora each December. He retired from the event in 2017, but it was picked up the following year by the non-profit Tuolumne County Sportsmen.

In an interview in 2017, Mutzner told Clarke Broadcasting about the origin of the popular community gathering. He thought it would be a fun idea to set up a pot on a sidewalk on a Friday leading up to Christmas and offer beans to anyone who stopped by. People loved the idea, and he continued for 30 years, whether there was rain, sleet or even the occasional snowstorm.

Mutzner noted in the interview, “People say that this is the biggest social event in Tuolumne County and they love to come.”

Some years as many as 700 people would attend the December bean feed.

Asked why he decided to hang it up in 2017, Mutzner stated, “I began this by saying that I would serve beans for 30 years. And now I’m 90 years old. It’s my party, and I did this for as long as I wanted.”

Adding, “After this year, if someone else wants to continue to do this, it is up to them. However, it won’t be my bean feed anymore. Maybe they could say my name every once in a while.”

Wearing his traditional cowboy hat, Mutzner was on hand to ring the ceremonial bell in 2018 as the event passed hands to new organizers. As always, people lined up and packed into the downtown area.

Mutzner passed away this morning at his home in Sonora. At his request, cremation will be held and there will be no memorial services. Inurnment will be at the Mt. Shadow Cemetery in Sonora. The Terzich and Wilson Funeral Home is overseeing the arrangements.