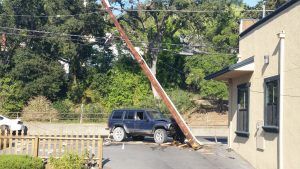 Sonora, CA — The driver that hit a power pole near downtown Sonora had reportedly fallen asleep at the wheel.

The crash happened at around 5:15pm, Wednesday, along South Stewart Street. It was near the Sonora Area Foundation office. 27-year-old Evin Aguayo of Angels Camp told Sonora Police officers that he fell asleep, and drifted into the pole.

The pole was sheared off at the base, and resulted in over 500 PG&E customers going without electricity for a couple of hours.

Aguayo, and his female passenger, were not hurt in the crash. The Police Department reports there are no signs of drugs or alcohol being a factor in the crash. Aguayo did have a suspended driver’s license.

Officials with PG&E, and the City of Sonora Public Works, responded to the incident.

A special thanks to community news partner Daren Slayton for sending in the photo. Pictures can be e-mailed to news@clarkebroadcasting.com.