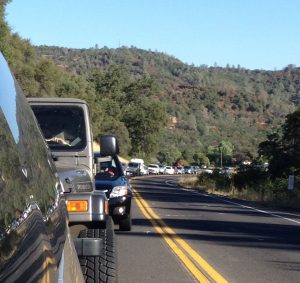 Murphys, CA — Delays in Calaveras on Highway 4 due to Caltrans work will continue until the winter. Caltrans Spokesperson, Rick Estrada says, “We are doing a rubber asphalt overlay on 21.6 miles of State Route 4.”

The company performing the road work is George Reed. The process involves, first removing the current lane stripes, which has already been done through most of the Murphys area. Striping removal and temporary painting of stripes caused delays of 15 minutes for vehicles especially during morning and evening commute times. Then after striping is removed, various pavement repair work will be done before a final overlay the width of the roadway will be put down with new lane stripping on top.

The overlay project will go through two school zones, Michelson Elementary and Avery Middle School. Both schools will be in session starting Wednesday, August 20th.  Estrada says Caltrans will do its best to keep all wait times to less than 15 minutes. He noted when there is heavy urban traffic projects like this can be done at night but it increases costs and is more dangerous for the workers.

A map of the construction area, from Ansel Davis Road below Murphys near Douglas Flat to Meeko Drive above Big Trees State Park, is here on Google Maps.