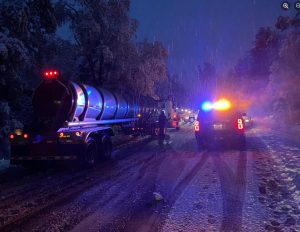 Sonora, CA — The Tuolumne County Public Works Department has some reminders about the snow removal policy. Snowplows are out today with the arrival of winter weather.

The information below is provided by the Public Works Department:

The Tuolumne County Public Works Roads Division would like to take this opportunity to remind the residents of the County who live in areas subject to snow accumulation about the basic snow removal policies and procedures. Snow is a mixed blessing in that it provides residents and visitors to the county the opportunity for winter sports and recreational activities but it is also costly in terms of snow removal for our County roads. The snow removal services are provided by County staff comprised of both permanent and extra hire employees. County snow removal activities are restricted to County maintained roads.

Parking restrictions in the County right-of-way during snow removal season are strictly enforced. Your car will be towed. The County will not be responsible for damage caused by snow removal operations of vehicles left in County right-ofway. No snow removal services are performed by County forces on private roads or County Service Area roads. Private road residents are expected to provide service for their roads. Residents on county service area roads are provided services by a private contractor to the county.

The Department of Public Works offices are open Monday through Friday from 8:00 a.m. to 4:00 p.m. and can be contacted at (209)533-5601. In the event of an emergency on weekends, evenings or holidays please contact the Sheriff’s Office at (209)533-5815 or 911 who will then dispatch the proper road department employees in the area.
With the currently available resources, Road Operations personnel can adequately handle most snowstorms above 4,000 feet elevation (provided that low elevations problems such as downed trees and flooding are not problems).

With the low snow levels and or other problems, snow removal service can be less than adequate.

Economic and personnel constraints do not permit a “bare pavement” snow removal policy. Snow removal will be accomplished by one shift, operating primarily during daylight hours. Ice control, and limited snow removal, may be
provided during early morning hours, as resources allow. Snow removal should begin as follows:

Normal Snow Removal Operations
• Normal snow and ice control operations are considered to be an eight (8) to fourteen (14) hour shift. This may include splitting the crew to operate a night shift.
During normal work shifts, as soon as snow depth on the pavement reaches one (1) to three (3) inches. Recognize that four inches of snow on your deck or in your yard does not necessarily mean that there are four inches on the roadway.

The snow may not build up as rapidly on black pavement. For snow fall after the normal shift, snow removal will begin the following shift. After all paved roads are plowed and safe for use, all-weather gravel roads will be plowed. Dirt roads will not be plowed.

• Crowding-Once snow removal operations have begun, the County will continue to plow snow and push it back to the shoulders until removal is completed and in preparation for additional storms. We must be certain that there is adequate space on the road shoulder for the new snow.

Unfortunately the necessity to continue to push the snow back to the shoulders of the roads after the storm is over does create additional berms that must be removed by the resident. We will attempt to complete this crowding activity as soon as possible so the creation of additional berms is kept to a minimum.

• Berms-During snow plow operations a berm of snow is left in front of all driveways therefore becoming the responsibility of the resident to clear.

Please note, if you, as a resident, clear the snow in your driveway into the roadway, it will be pushed back again just as it had originally fallen. There is no discernment between fresh snow and shoveled snow into the
roadway. Snow may remain in parking areas for hours or days after the snowfall has ceased.

During a storm, main roads and school bus routes have priority over other roads. Each piece of snow removal equipment has an assigned route. The operators will start at the beginning of their assigned area and plow until they reach the end of that area and then will start back at the beginning. Complete clearing of local roads and cul-de-sacs is a last priority.

Unless otherwise assigned, equipment and personnel will perform snow and ice control first on Priority 1 roads and stress on a county-wide basis. Priority 1 roads will be kept passable to properly equipped vehicles. As conditions and time permit, plowing of Priority 2 roads will follow, and so on until all roads normally plowed can be used by properly equipped vehicles. When the snow emergency condition no longer exists, a request to rescind the emergency declaration will be made by the Director.

• Storm emergency snow and ice control operations- If conditions such as extended heavy snow fall, low elevation snowfall, reduced equipment availability, lack of personnel or major problems elsewhere to maintained road system are present, a request for declaration of a “storm emergency” may be made by the Deputy Director of Roads to the County Emergency Services office. When a storm emergency is declared, snow and ice control operations will shift to a priority basis.

Notes: Snowfall to 1,400 foot elevation (Jamestown) can result in the need for snow removal on over 900 lane miles.
Lane mile = one lane, one mile in length and includes turning lanes, passing lanes and similar appurtenances. Each lane mile usually requires two to three passes if the plow is to “crowd” the snow off the traveled-way.

During an active storm, additional passes over each road are usually needed. The average speed for a snowplow is about 12mph. When snow is traffic compacted, numerous passes must be made by large plows or motor graders to remove the ice.

De-Icing
• Attempts to shave ice under freezing temperature circumstances have proven futile and have the effect of polishing the ice making it even more slippery. Normal ice removal takes place once ice has thawed slightly.
Salting
• When ice is so thick and frozen that it cannot be cut with machinery, salting provides the ability to begin the breakdown of the ice. The hopeful outcome is the ability to then shave the ice in layers with machinery. This process is very politically controversial and is used very sparingly throughout the county.

Sanding
• We have designated a portion of the roads which will be sanded in order to maintain the main routes for traffic. These roads include school bus routes and major thoroughfares such as Phoenix Lake Road, Parrotts Ferry Road, Twain Harte Drive, Tuolumne Road and Ferretti Road. Please remember, sand is not a substitute for chains and does not guarantee traction for tires.

Restriction Signs
Tuolumne County Ordinance Code Section 10.28 “Snow Removal” Prohibits Parking on the Pavement or Road Shoulder During Snow Removal Operations. There are signs posted on the roadways near subdivision entrances/exits major
collectors and minor collectors noting snow removal policies. If you see a neon pink card, like the one below, placed on the windshield of your vehicle or the door of your residence, these have been placed due to the fact that there are items in the right of way i.e. vehicles, basketball hoops, wood splitters, boat trailers or any other number of items. Snowplow drivers cannot complete their plowing on a road if there is the chance they will not be able to turn around at the end of the road or there are too many items in the path of the plow. Your road may not get plowed.

Garbage cans are another item frequently hit or plowed under by snow removal equipment. Cans should be placed well back from the roadway shoulder and ditch areas.
• The County will attempt to keep all paved County Roads below 5000-foot elevation open but severe storms sometimes result in persons being snowbound. Be prepared.

VEHICLES LEFT PARKED ON THE PAVEMENT OR SHOULDER WILL BE TOWED AND STORED AT THE OWNER’S EXPENSE!

1. Plan ahead, be prepared, and don’t travel unless necessary. Carry a survival kit consisting of blankets
or sleeping bag, water, and a flashlight in case of vehicle breakdown or becoming stuck in the snow.
2. Please caution children not to play in the streets or on the snow berms, this is very dangerous. Explain to
your children that drivers may not see them or be able to stop in time to avoid hitting them
3. Always carry chains.
4. Do not shovel or put snow from driveways in the roadway as this creates a hazard for other drivers, a liability for you, and is illegal.
5. Snowplows make frequent stops and backup maneuvers, do not drive your car up behind a snowplow as the driver may be unable to see you and inadvertently back into your car. If you are behind a plow that stops, stop your vehicle in such a way that your car looks into the driver’s outside rearview mirror and please give them extra room.

THANK YOU FOR YOUR COOPERATION, AND LET’S HAVE ANOTHER
SAFE WINTER. PLEASE REMEMBER, WE NEED YOUR HELP.