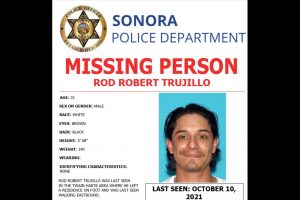 Sonora, CA – Sonora Police want people to take a good look at the 31-year-old man in the image box photo.

He is Rod Robert Trujillo of Sonora. His family reported him missing to the police. Trujillo was last seen in the Twain Harte area on October 10th leaving a home heading eastbound, according to police. The address of the house was not provided.

Police describe Trujillo as a white male (other missing person flyers from his family detail that he is Native American Indian) with black hair and brown eyes. He is 5”8’ tall and 140 lbs. Police did not have information regarding what he was last seen wearing.

Anyone recognizing him or who may know of his whereabouts is asked to contact the police at 209-532-8143.