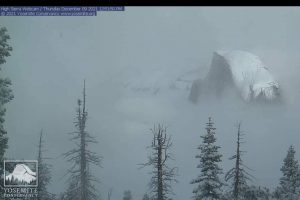 Yosemite, CA — All the Mountain Passes are currently closed due to the winter storm currently blowing through and one will not be reopening any time soon.

Those roads are generally closed between November and May, but the exceptionally dry fall has allowed them to remain open longer than usual. Tioga Pass has been closed since mid-November with some icy patches remaining on the roadway from a storm that included an atmospheric river, setting rain records. Glacier Point Road had reopened but was closed yesterday (Dec.8) due to the current inclement weather. Regarding the amount of snow accumulation, Gediman added, “The snow levels depended. We got a couple of inches reported at Tuolumne Meadows and a dusting in Yosemite Valley. It’s nice to get precipitation and we’re expecting significant storms to come in this weekend and into next week.”

As reported here earlier this week, Caltrans officials have not made a decision on whether to close Highway 108 Sonora pass or Highway 4 Ebbetts pass for the winter season and say they will make that decision after inspecting those roadways after the current and incoming storms blow through.

To view live cameras inside Yosemite National Park or other areas in the Mother Lode go to the mymotherlode.com webcam page.