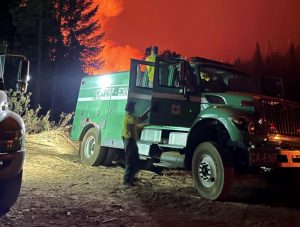 Sonora, CA — A father and son were arrested today in connection with allegedly igniting the Caldor Fire in El Dorado and Amador counties that forced hundreds of residents from their homes this summer, including the South Lake Tahoe community.

66-year-old David Scott Smith of Somerset and 32-year-old Travis Shane Smith of Folsom were arrested on “reckless arson” charges, which caused inhabited properties to burn and resulted in great bodily injury to multiple victims, according to the El Dorado County District Attorney’s Office. No details were released regarding how the fire was ignited or what led to the two men’s arrest.

The Caldor Fire broke out on August 14th. It scorched over 221,00 acres and destroyed more than 1,000 structures, 770 of them homes before it was officially called contained on Oct. 22nd, as reported here.

The D.A.’s office noted that it worked with the Sacramento County District Attorney’s Crime Lab to investigate the cause of the Caldor Fire, but did not detail what the lab tested or any results found. Others assisting in the investigation included the USDA Forest Service, CAL Fire, and the California Department of Justice.