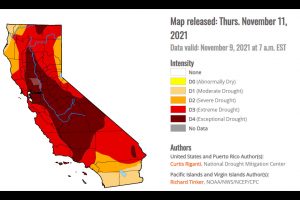 Sacramento, CA —  A call to Californians to save more water this year due to the drought has gone unanswered.

Last summer Gov. Gavin Newsom asked the state’s nearly 40 million residents to voluntarily reduce water use by 15% in 2021. New data released Tuesday shows few people are heeding that request. The data shows that in September, Californians reduced their water use by only 3.9%, down from 5.1% in August. Overall, since Newsom made the request in July, water consumption has gone down by just 3.6%.

State officials had hoped reduced water use would continue to improve each month as the public learn about the drought and water agencies pushed conservation efforts. Instead, the data showed none of the state’s “hydrologic“ regions met the 15% threshold, Additionally, two in the Central Valley region, accounting for 10% of the state’s population, actually used more water in September than a year ago. However, water agencies say California has actually reduced its consumption because of changes put in place during prior droughts. They say that makes cutting even more now harder.

California’s most recent “water year,” which runs from Oct. 1 to Sept. 30, was the second driest on record in terms of statewide precipitation. Even with last month’s “atmospheric river” storm that blew through dumping record amounts of rain in the northern half of the state, including 5.44 inches in Sacramento over 24-hours.

While state regulators have temporarily lifted curtailments for farmers and other large water users after that storm increased flows in the state’s major rivers and streams. That may not last for long though, as California heads into its traditionally wettest time of the year with 80% of the state classified as in extreme or exceptional drought, the two worst categories assigned by the U.S. Drought Monitor. To the right is the latest state reservoir level map provided by the Department of Water Resouces: