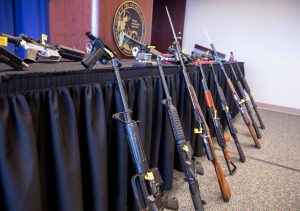 Sonora, CA – The state’s ban on high-capacity magazines will remain in place after the 9th U.S. Circuit Court of Appeals overturned an earlier ruling Tuesday in a split decision that could be headed for the U.S. Supreme Court.

The 11-member panel of the San Francisco-based court’s decision came after two of three judges on a smaller 9th Circuit panel last year ruled the state’s ban on magazines holding more than 10 bullets violates the U.S. Constitution’s protection of the right to bear firearms.

“The statute outlaws no weapon, but only limits the size of the magazine that may be used with firearms,” the court said in the 7-4 ruling. The majority went on to reason that “the limitation interferes only minimally with the core right of self-defense, as there is no evidence that anyone ever has been unable to defend his or her home and family due to the lack of a large-capacity magazine; and … the limitation saves lives.”

Hinging in part on which legal standard should be used to determine the outcome, the 9th Circuit’s majority chose the more stringent standard. It found that “intermediate scrutiny applied because the ban imposed only a minimal burden on the core Second Amendment right to keep and bear arms.”

The plans are already underway by gun owners’ rights groups to appeal the ruling to the U.S. Supreme Court. They hope it will select a lower legal standard for Second Amendment cases in an upcoming decision on a New York law restricting concealed weapons.

Seven judges on the 9th Circuit panel were appointed by Democratic presidents. Praising the ruling is gun control proponents and California Attorney General Rob Bonta who called it “a victory for public safety in California.”