CAL Fire To Do More Burning Near West Point 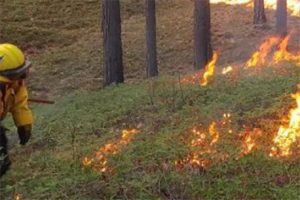 West Point, CA — CAL FIRE reports it will be continuing a prescribed burn tomorrow that was first ignited on Monday in the West Point area and is expected to create smoke in the area.

Crews will once again set ablaze the Winton-Schaad Vegetation Management Plan (VMP) burning operation on Thursday, Dec. 2 and it will last until Saturday, Dec. 4. Flames were first ignited at the site on Monday, Nov. 29th for a one-day burn, as reported here.

This project is in the North-Eastern portion of Calaveras County, four miles north of Wilseyville near Lily Gap Folsom Road and Winton Road in West Point. CAL Fire relayed that the burn is designed to reduce forest fuels in strategic locations within the project area. They also noted that additional prescribed burns within the project area are anticipated throughout the winter and spring. All burning depends upon fuel and weather conditions.

The burning operations will be run from 8 a.m. until 5 p.m., each day. Smoke may be visible to residents in the Wilseyville and West Point areas as well as motorists traveling along Highway 26. CAL Fire as that it not be reported as a wildland fire.