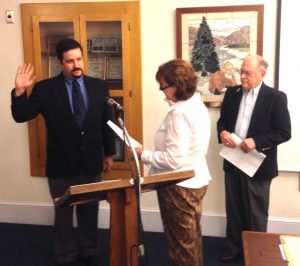 It was the first meeting for top vote getters in the June election, George Segarini and Jim Garaventa. Right before taking the oath, Segarini said, “I’m anxious to get it over with, at this point, and get to work.”

Segarini said his top priorities include implementing aspects of the Vision Sonora Plan and finding ways to make improvements related to the water infrastructure.

New Councilman Garaventa said, “For me it’s a long time coming. This was my third attempt at the City Council level, so third times a charm, I suppose. I just want to be a good steward, and do some good things for the city.”  He said he wants to see that the city’s infrastructure is improved in the years ahead, via the Vision Sonora effort, but he says not at the expense of the city’s history.

The Council also took time to recognize outgoing council member Hank Russell for his 12 years of service and Matt Hawkins for his four years. Both members were on hand for their final meeting.

Ron Stearn was elected the new Mayor. He will serve in the role for the next two years. Connie Williams was appointed as Mayor Pro-Tem.