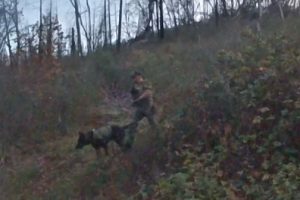 CCSO deputy and K9 searching for the suspect

Mountain Ranch, CA – Using a helicopter and K9 units, a Rail Road Flat man who was wanted for attempted murder was flushed out of a wooded area after running from a Calaveras Sheriff’s Deputy yesterday afternoon.

After inquiries from Clarke Broadcasting related to the arrest of  43-year-old Jakob Main, Sheriff’s spokesperson Lt. Greg Stark detailed that while in the area of West Murray Creek Road and Salamander Creek near Mountain Ranch, a deputy spotted a man running from a property. He immediately recognized the subject as Main, who was wanted for several felony cases and was considered to be armed and dangerous. He was ordered to halt but instead ran into thick vegetation, according to Lt. Stark.

Backup was called to the scene consisting of Amador Sheriff’s Deputies and K9 units and a perimeter was immediately set up. With the help of a CHP helicopter reporting Mains location, lying down in some thick brush, the dogs were able to quickly find him. He was taken into custody without further incident.

Main faces new charges of resisting or delaying a peace officer for Tuesday’s incident. He was additionally charged with attempted murder, stemming from an investigation into a November 9th shooting that occurred on Hidden Valley Road in Mountain Ranch where a 42-year-old male was reportedly shot by Main. Lt. Stark added, “There was a dispute over a recently dissolved relationship. Main entered a dwelling and shot a male victim in the lower torso area with a firearm and then fled the residence. The victim was flown to a valley hospital for treatment and subsequently released a few days later.” He noted that due to this being an ongoing investigation no further information is being released.

In September, Main led deputies on a chase in a stolen 2004 Dodge Ram pickup in Rail Road Flat after a deputy tried to pull him over. In that incident, Main reached speeds of 65 mph and then suddenly jumped out of the truck and allowed it to roll back into the deputy’s patrol vehicle to escape being caught, as detailed here.

Main faces a laundry list of charges for his felony warrants that included charges of transportation for sale and possession of methamphetamine, reckless evading, felon having a firearm and ammunition, and vehicle theft, among others.

“We’re extremely happy that nobody was harmed or hurt in the apprehension of suspect Main. He’s been actively avoiding arrest by a vehicle pursuit and running from deputies for quite some time. The fact that he was taken into custody is a testament to the persons on scene the perimeter they set up and the coordination between allied agencies,” stated Lt. Stark.

Main is being held without bail at the Calaveras County Jail.