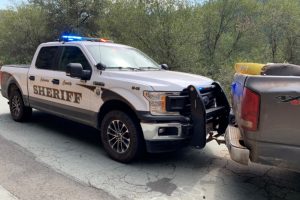 Suspect's truck that rolled back into patrol vehicle

Rail Road Flat, CA – A chase over several windy roads in Rail Road Flat Towards Wilseyville ended with the suspect possibly creating a diversion to slow down the deputy hot on his heels and evade arrest.

Eyeing the driver of a 2004 Dodge Ram pickup as a wanted man with a felony warrant stemming from an earlier arrest for evading, possessing stolen property, and elderly abuse, a Calaveras Sheriff’s Deputy tried to pull the truck over on Ridge Road around 12:30 p.m. Wednesday. Instead, the suspect, 43-years-old Jacob Aaron Main from Railroad Flat, hit the gas and the deputy gave pursuit.

After reaching speeds over 65 mph and repeatedly crossed over the double yellow lines on several roadways, Main turned north on Railroad Flat Road heading towards Wilseyville. Sheriff’s spokesperson Lt. Greg Stark details that near Noble Road, Main abruptly stopped the pickup and jumped out, running down an extremely steep embankment. The truck rolled back into the ensuing patrol vehicle keeping the deputy pinned inside until the two vehicles collided.

“We won’t know for sure his intentions of letting the vehicle roll back into the deputy. However, by the way he was driving and his previous attempts to evade law enforcement, we would not discount that it was a calculated effort to delay the deputy’s response,” smized Lt. Stark.

Back up arrived on the scene, including a CHP helicopter, but Lt. Stark relayed, “The area he [Main] ran was a near-vertical embankment into a heavily wooded area. Despite the best efforts of the deputies on scene and the delay of chasing after him, suspect Main was able to escape capture.”

A records check revealed the truck reported stolen in May out of San Andreas. A search of the pickup turned up about 60 grams of methamphetamine, 29 grams of heroin, hypodermic needles, and a loaded 9 mm handgun. Lt. Stark shared, “It was near the front seat and had a round in the chamber. So, it was readily available to him.”

The sheriff’s office is submitting new felony charges against Main for evading a peace officer with disregard for public safety, possession of narcotics for sale and transportation,  prohibited person in possession of a firearm and ammunition, and possession of a stolen vehicle. With Main being from the area, Lt. Stark admits it may take a while to apprehend him, stating, “He’s intimately aware of all the trails and sneaky places to get away up there. It could be a while before we capture him. He knows the roads very well and the perfect places to jump out and run from us to make it harder on us.”