Fifth Of All Giant Sequoia Trees Torched In Wildfires 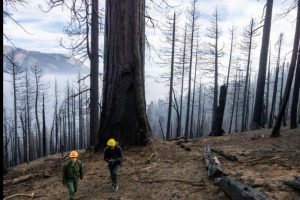 Sonora, CA — More detailed information is becoming available about the extent of giant sequoia mortality in the southern Sierra Nevada after recent wildfires swept through groves and it is not good.

California has seen its largest fires in the past five years. Last year set a record for most acreage burned with this year a close second. A report recently compiled from fire response documents and released by the National Park Service on Friday estimates the death toll of the big trees over the past two years due to fires to be about a fifth of their population. This year the lightning-sparked wildfires, the KNP Complex in Sequoia National Park, and the Windy Fire in the surrounding Sequoia National Forest tore through more than a third of groves in California and torched an estimated 2,261 to 3,637 sequoias. It even threatened the world’s largest giant sequoia, as reported here. The report detailed that sequoias four feet or more in diameter have either already been killed by fire or have been so severely burned that they are expected to die within the next three to five years.

The Castle and SQF Complex wildfires last year also killed an unprecedented 7,500 to 10,400 giant sequoias that are only native in about 70 groves scattered along the western side of the Sierra Nevada range, according to the report. Those losses now account for 13% to 19% of the 75,000 sequoias greater than 4 feet in diameter. Environmentalists point to climate change noting that the blazes were so intense and burned hot enough and high enough to kill so many giant sequoias, which were once considered nearly fire-proof.

“The sobering reality is that we have seen another huge loss within a finite population of these iconic trees that are irreplaceable in many lifetimes,” said Clay Jordan, superintendent of Sequoia and Kings Canyon National Parks. “As spectacular as these trees are we really can’t take them for granted. To ensure that they’re around for our kids and grandkids and great-grandkids, some action is necessary.”

The report also described that in areas where the fire burned so hot it killed the seeds of those trees so they will not be able to regenerate and may need additional help. Park officials relayed that for the first time, they are considering planting seedlings to preserve the species, but even if that step is taken, it will take hundreds of years to replace the trees that were lost.

Not all of the sobering report is bleak, however, as there were key findings showing a lot of low-intensity fire, which sequoias need to thrive. Those flames cleared out vegetation and their heat opened cones allowing their seeds to spread. There was also less damage in many of the groves where prescribed fire was used to clear out vegetation, emphasizing the need to expand that work. NPS added that the tree deaths this year might have been worse if heavy rain and snow in October had not dampened the fires.

Currently, the KNP Complex Fire is 75% contained at 88,307 acres and the Windy Fire was pronounced 100% contained on Thursday after scorching 97,528 acres.