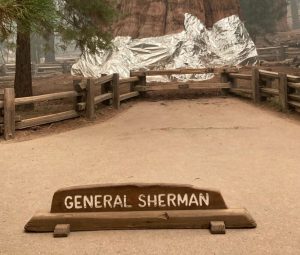 Officials are taking precautions, like wrapping the world’s largest giant sequoia in a fire-resistant aluminum blanket, as a wildfire grows in Sequoia National Park.

The General Sherman Tree is 275 feet high and has a circumference of 103 feet at the ground level.

The lightning-caused KNP Complex Fire has burned 9,365 acres. Some other sequoias, and buildings like the Giant Sequoia Museum, have also been wrapped with aluminum to protect against intense flames.  The incident command believes the fire could reach the Giant Forest, a grove of 2,000 sequoias, within days.

Sequoias have historically been pretty resistant to wildfire, but they are susceptible to fires of very high intensity.  For example, last year’s nearby Castle fire killed an estimated 7,500 – 10,000 large sequoias, according to the National Park Service.