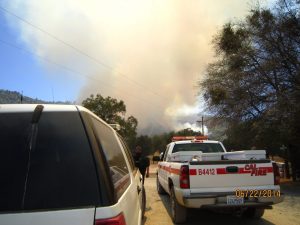 Cal Fire Spokesperson Nancy Longmore says, “The blaze is 80 to 100 acres and 50% contained. Also, one outbuilding has been destroyed.”  Longmore adds the rate of spread remains moderate.

The Calaveras County Sheriff’s Office has evacuated five homes on Riata Way.  Deputies made those evacuations around 4:30 this afternoon.  An evacuation shelter has been opened at the Copperopolis Elementary School at 217 School Street in Copperopolis.  Also, power lines in the area remain threatened.

A traffic alert has been issued to motorists to avoid Pool Station Road, and Riata Way, to Highway 4 for the next few hours due to the fire activity. In addition, Pool Station Road at the Highway 4 intersection is closed. CHP Officers are directing traffic in the fire area.

Click here to view a map of the area.

More details about what happened this day are in the news story Oak Fire Update, Anecdotes and here. The next day’s information is here.

We’ll pass along more information as it comes into the news center. Photos can be sent to news@clarkebroadcasting.com.  A special thank you to Michael A Backlund for sending in these photos.