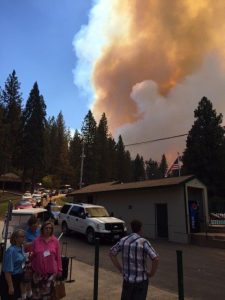 View of the Oak Fire from the Old Oak Ranch Conference Center about 2:11 PM Tuesday 9/8

Cedar Ridge, CA —  Along with Cedar Ridge residents threatened by the Oak Fire as it broke out Tuesday, members of a visiting church group sweated out the evacuation efforts.

Hailing from Humboldt County, Ferndale resident David Kilmer says he was attending a church retreat at Old Oak Ranch Conference Center when the flames made their first appearance in the one o’clock hour. “Fortunately, there was some Cal Fire people that were staying at the conference center that were there for some sort of a training event,” Kilmer recounts. “So, they started helping people get their stuff out of their rooms and put them in their cars…told us to get our cars down to the lower level — that we would need to evacuate.”

At one point, according to Kilmer, the encroaching flames from what reportedly started as two separate fires were blocking their exit. After awhile, as winds shifted, Kilmer says, evacuees were led out a back way. Now at home after making the long haul back last night, Kilmer says the fire shortened his stay by about a day and the timing around which it first happened was a real cause for concern, as other ranch guests were in the middle of their afternoon “free time,” during which some stayed onsite while others were heading off to play tourist.

“There were women crying and there were several families with children and babies there…and you knew it was dry, everywhere, as you know,” Kilmer shares. While leaving, he says his thoughts turned to worry for local residents, recalling, “As we drove out, we saw neighbors that obviously live up there with very nice homes and ranches, standing around watching. So, we were trying to get out — but they were still staying there.”

While recalling his experience to Clarke Broadcasting, Kilmer provided two photos he took (see left image box) from his vantage point in Cedar Ridge. Grateful for the actions of local fire and safety personnel and others Kilmer states, “I would just credit the Cal Fire team that was up there and the staff on the ranch, plus the [church retreat] staff of the district…group. They did a really good job, running around on golf carts with speaker horns, telling everybody where to go, so there wasn’t panic, it was all orderly.” In sending thanks to all involved in the evacuation, firefighting and other response efforts, he comments, “Your support team did a great job — thank God the airplanes got up there with the retardant really fast.”

As this report was filed, the Oak Fire was reported to be at 102 acres with 50 percent containment. Additionally on Wednesday afternoon, Cedar Ridge resident Regina Alderman shared photos (also available in the image box) of damage to her property off Big Hill Road below Old Oak Ranch. She reports that the blaze, which came within 100 feet of the main house, destroyed the barn and spring house and also burned a skidder and firewood processor.