Increase In Wildlife On Groveland Campus 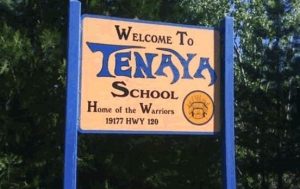 The Rim Fire burned many areas adjacent to Groveland. Urquhart notes with such limited feed and cover out in the forest the lawns and flowers in the subdivisions and schools seem to be attracting more animals than usual.

Urquhart notes that there have been 20-30 deer on the Tioga soccer field almost daily. He says, “Before there were a few at a time but I have never seen this many together in Tuolumne.” Urquhart notes that the deer do seem to be keeping the green grass well trimmed. He also reports wild turkeys and Canadian Geese are often on the field as well. Shortly after the Rim Fire a large Mountain Lion was spotted by a custodian on campus a few nights in a row.

In May, when Tenaya Elementary was in session, there were two bear incidents in one day. A bear was sighted in the morning and at lunch time the bear wandered into and out of the parking lot. As a precaution the students at the school were in lock down for 20 to 30 minutes after each bear sighting. The department of fish and game was called and stayed at the campus that day as well.

At Don Pedro High School’s FFA chicken coop a five foot long rattle snake was found. It had died, tangled in the wires half out of the coop. It was the largest snake the staff had seen with a 15 button rattle. Urquhart says about rattlesnakes; “Everybody is always aware, kids are accustomed to that.”

The schools in Groveland will continue to keep their eye out for local wildlife as a feature of living in the forest and near the 402 square miles burned by the Rim Fire.