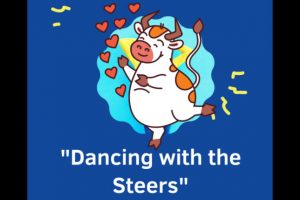 Angels Camp, CA – A winner has been chosen in the 2022 slogan contest for the Calaveras County Fair & Jumping Frog Jubilee and it was more of a group effort.

The deadline to enter a slogan was November 5th. It was selected out of a pool of 164 public entries and 3 submitted by the fair staff. The board of directors poured over the 167 total submissions and selected “Dancing with the Steers.” The idea was submitted by fair staff, they are forgoing the $300 prize money.

Earlier in the contest, fair officials made a plea to the public not to submit any slogans that were political in nature. That request came after receiving what they considered a “disrespectful and inappropriate” slogan, but what it said was not disclosed, as reported here.

The upcoming fair runs May 19-22. That is when the public is encouraged to put on their dancing shoes and head to Frogtown in Angels Camp for all the festivities.