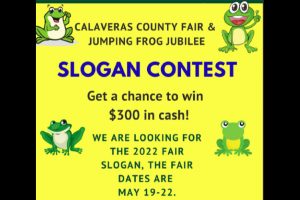 Angels Camp, CA – There are only two days left to submit a slogan for this year’s Calaveras County Fair & Jumping Frog Jubilee and win $300.

In past year’s themes include; Be a Kid Again, Boots, Chaps and Cowboy Hats, Heard it Through the Grape Vine, and Eggspect the Best. Last year’s slogan was “Frogtown Hoedown” created by Copperopolis native Darria Westberg and selected out of 110 that were submitted, as reported here.

This year’s slogans can be about the county, agriculture, recreation, and history, but not political in nature citing a recent submission. Fair officials in a written release, stated:

“Unfortunately, there was a published submission that was disrespectful and inappropriate. We did not recognize it as political slang and thought it was western slang. Please refrain from submitting political slogans.”

What that slogan proposal said was not released. Submissions are due on Friday, November 5th, and can be emailed to laurie@frogtown.org.