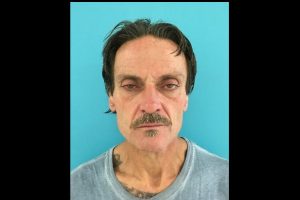 Jamestown, CA – A Jamestown man convicted of manslaughter 17 years ago has been arrested again, this time on drug and weapons charges.

Those stem from a recent 911 call that brought Tuolumne County Sheriff’s Deputies to the Jamestown Carwash off Highway 108 in Jamestown for the report of a man attempting to break into an electrical box. While investigating at the scene deputies spotted a man, 50-year-old Troy Spirk, matching the suspect’s description and began to question him.

Sheriff’s spokesperson Nicco Sandelin detailed that Spirk admitted to having a gram of methamphetamine on him. The deputy also found drug paraphernalia, and several knives in his pockets. A records check also revealed that Spirk was on Post Release Community Supervision (PRCS). He was arrested for possession of drugs and drug paraphernalia along with parole violations.

Once at the jail, Sandelin disclosed that Spirk was given a more detailed search that uncovered an additional razor blade concealed on him. That tagged on the added charge of bringing a weapon into a custody facility.

Spirk has a history of arrests, the most serious involved the 2004 beating death of 50-year-old Steven Allen Davis following an argument. Spirk agreed to a plea deal reducing his charge from murder to involuntary manslaughter, as detailed here. After serving his sentence, in July of 2016, Spirk was arrested for a second time after deputies attempted to pull him over for erratic driving in Sonora, sparking a short chase that ended in his capture, as detailed here.