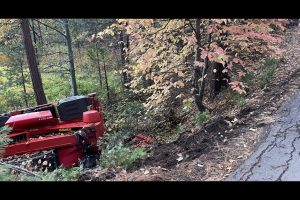 The wreck happened around 5 p.m. on South Fork Road. CHP spokesperson Faustino Pulido reported that 58-year-old Larry Barr of Twain Harte was driving a Manitou MRT 2150 Privilege Plus, which is a rotating all-terrain telehandler forklift. Pulido detailed that the large forklift was southbound on the roadway approaching Manny Marshall Drive when Barr pulled onto the shoulder to allow an oncoming vehicle to pass. He added that the right-side wheels went into soft dirt causing it to overturn and roll over several times down an embankment about 15 feet.

That section of the roadway will have to be closed to remove the wreckage. Pulido says the shutdown will be between 8:30 and 11:30 a.m. and leave residents north of that area unable to exit during that time, as two heavy-duty tow trucks retrieve the forklift.

Barr was not hurt in the crash.