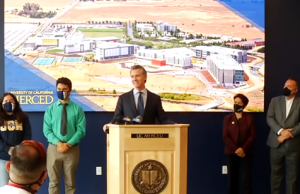 Merced, CA — Governor Gavin Newsom was in the nearby Central Valley this morning to tour the planned location of a UC Merced Medical School.

It will be the first of its kind public medical school in the region and in direct partnership with UC San Francisco.

There was a hope to build a medical school as part of the original concept when UC Merced was established in 2005, but the recession hit, and funding never materialized. Governor Newsom announced that $200-million was set aside in the recently approved state budget.

The campus will not include an associated hospital, like some UC medical schools, but will allow for training and research and development.

The plan is to serve over 2,000 undergraduates by 2030. Governor Newsom argued it will help limit the inequities that some rural communities face with healthcare, and he expressed a belief that many students trained will stay in the nearby communities to serve patients.