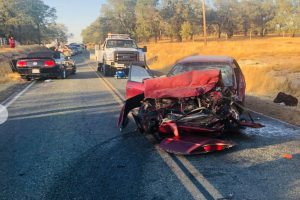 Wallace, CA – A head-on crash near Lake Camanche this past weekend resulted in three people being flown from the scene.

The collision happened Saturday just before 7 p.m. on Pattison Road in the Wallace area of Calaveras County. The CHP reported the driver of a 2002 Toyota Corolla, 26-year-old Jacob Sutton, and his passenger, 30-year-old Cristina Shuwoy, both of Wallace, were southbound, approaching the South Camanche Parkway intersection. Northbound on the parkway was 32-year-old Benjamin Tosta and his passenger 33-year-old James Flores, both from Manteca, in a 2007 Ford Mustang.

For an unknown reason, according to the CHP, Sutton’s vehicle crossed over the double-yellow lines directly into the path of Tosta, who tried to avoid the crash by swerving left. At the same time, Sutton realizing he had drifted into opposing traffic steered his car back into the southbound lane, causing the two vehicles’ front ends to collide.

Alcohol or drugs are not suspected in this collision, according to the CHP.