A Stolen Car And A Concealed Knife Resulted In Three Arrests 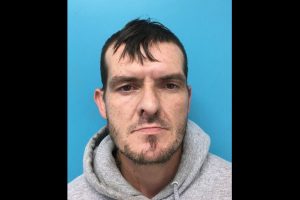 Sonora, CA – Three suspects were arrested after a search revealed a stolen vehicle and a concealed knife.

A report of a “physical altercation” on Wednesday near the Tuolumne County Law and Justice Center off Old Wards Ferry Road near Highway 108 sent deputies rushing to the scene. Upon their arrival at a nearby homeless camp, deputies contacted 37-year-old Kristy Canham, 37-year-old Jacob Murray, and 28-year-old Charles Gilbert, all transients. Murray and Canham were sitting inside a sedan while Gilbert stood outside the vehicle. During their questioning deputies noticed that the car had an expired registration tag.

Deputies conducted a record check of the vehicle’s VIN number and discovered the vehicle had been reported stolen out of Jackson. Additionally, Murray and Canham had warrants for their arrest from a prior shoplifting incident and Gilbert was on searchable probation. A pat-down of him revealed a concealed dagger in his back pocket and drug paraphernalia.