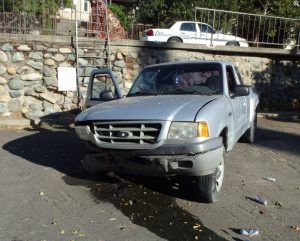 Sonora, CA — Two minors were injured in a DUI crash in downtown Sonora.

The driver, 18-year-old Brian D. Murray was arrested for DUI. The PD reports that he was suspected to have been driving under the influence of marijuana. Two juveniles in the vehicle, ages 15 and 17, were treated for injuries. They are described as “non-life-threatening” in nature.