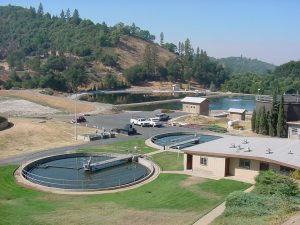 Built in the 1970s, the current facility is nearly 50-years old, and the TUD board has hired Kiewit Infrastructure West, Co., out of Fairfield for the project with a price tag of $35,025,010. The groundbreaking ceremony is set for Monday, October 18th at 9:00 a.m. at the facility located at 1400 Southgate Drive in Sonora and is visible from Highway 108. Here is the design of the new Sonora Regional Wastewater Treatment Facility.

As earlier reported here, most of the project cost is being covered by a United States Department of Agriculture (USDA) grant/loan package that includes over $8.5 million in grant dollars, and about $24.9 million as a low-interest loan. The district will contribute around $8.8 million of its own funds from wastewater reserves. Construction is scheduled to be completed within two years, according to district officials.