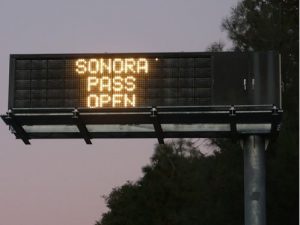 Sonora, CA – Caltrans announced this afternoon that all the Mountain Passes have reopened.

The last to open was Highway 108 Sonora Pass. Caltrans detailed that it opened to travelers as of 10 a.m. Thursday. All four Sierra Nevada passes were temporarily closed this week due to inclement weather then gradually reopened as crews inspected the roadways for damage and then gave each the green light to reopen.

Tioga Pass reopened on Tuesday and Ebbetts Pass on Wednesday. In the fall it is common for the mountain passes to temporarily close, and then reopen. The passes will not officially close for the winter season until there is enough snow accumulation to keep them shut down.