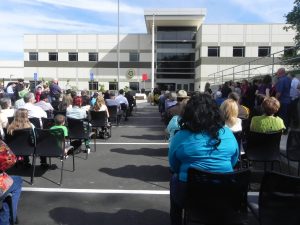 “It feels great!” says Sheriff Gary Kuntz. “It’s been a long time coming, a lot of trials and tribulations.”

The jail was slated to open in the spring of 2013, but construction problems caused delays and pushed the date back.  Kuntz says, “The Sheriff’s Office is open right now.  The jail is ready to be opened, but all the correctional officers are learning how to use all the high tech equipment. As  soon as we get that up and running we’ll move them [inmates] over.”

A large crowd was on hand for the dedication and tour of the roughly $59 million facility that followed. District 4 Calaveras County Supervisor and Board Chair Debbie Ponte told the crowd, “This facility represents an important investment for our future and will serve the community well into the future with state of the art technology.”

After the tour, Calaveras County resident and former Undersheriff Ron McFall had this reaction to the jail. “I was very impressed. The fact that this is top of the line, there’s nothing second rate here,” says McFall.

The jail has 160 beds, but only 80 will be available initially. More beds will open up in the future as staffing becomes available. The jail is scheduled to open in May. Sheriff Kuntz told the crowd there have been many people offering suggestions of who he should dedicate the jail to, but Kuntz says, “I want to dedicate this jail to the people of Calaveras County.”