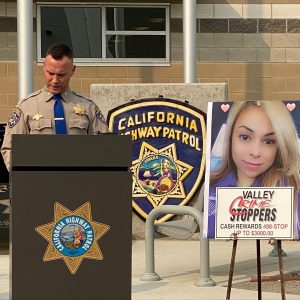 Fresno, CA — A Republican Assemblyman who represents Fresno held a press conference this morning following the hit-and-run arrest of Sonora Cardiologist Dr. James Comazzi and cited it as a primary reason for lawmakers to pass new legislation to crack down on those who leave the scene of a deadly crash.

Assemblyman James Patterson represents the area where the alleged incident occurred eight months ago. We reported yesterday that Dr. Comazzi was arrested this week by the Fresno CHP after an anonymous tip was called in about a fatal hit-and-run that took the life of 26-year-old good Samaritan, Juliana Ramos. Click here to view the earlier story.

Assemblyman Patterson opened today by stating, “Juliana Ramos, a young nurse, pulled over to help a victim. She was doing the type of thing that people do all the time, particularly as a nurse, and then she was hit and killed by a driver, who hit her and fled. That driver has now been caught.”

Assemblyman Patterson says the maximum penalty for a deadly hit and run is a four-year sentence. However, he says a felony DUI conviction can bring up to 15 years in prison. He argues that there is an incentive for intoxicated people to leave the scene of the crash. He is now reauthoring a bill calling for the penalties for both of those offenses to be in line and essentially increase the penalties for hit-and-run. His efforts to pass the same bill last session failed.

Patterson calls it a “big loophole” in state law.

It is noted that Dr. Comazzi was not accused of drunk driving when he was arrested by the CHP. He is charged with felony hit and run and vehicular manslaughter.