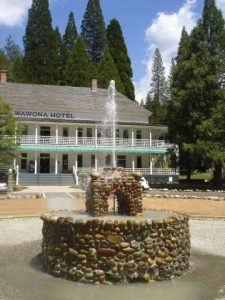 Yosemite Park, CA–A hundred-year-old building in Yosemite located at the Wawona Hotel has been restored and turned into a visitors attraction. It was originally used as a laundry by Chinese workers at the hotel and the attraction seeks to recognize Chinese Americans’ contributions to the early history of the national park.

Yosemite officials unveiled a new sign on Friday marking the Chinese Laundry Building in Yosemite Valley. New features include exhibits that tell the story of Chinese workers who helped build Tioga Road and Wawona road, both critical components that helped bring visitors to the park.

The building was being used as a storage facility, part of a group of structures that will make up the new Yosemite History Center, which will make immigrants and their history in the park a focal point. The Chinese Historical Society of Southern California supported the building renovation and was happy to see Chinese people recognized as an important part of the park’s origin.