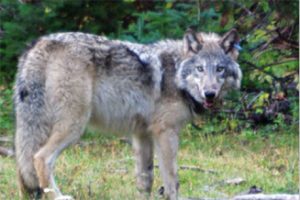 Sonora, CA – The rare gray wolf OR-93 that visited Tuolumne County twice this year may be heading south.

If so, this is the farthest south that any gray wolf has been documented in California since one was captured in San Bernardino County in 1922. Although the California Department of Fish and Wildlife CDFW does not have forensic evidence to confirm it is OR-93, there have three separate wolf sightings in northern Ventura County (north of Los Angeles), between September 20 and 26th. CDFW officials disclosed that in those cases the wolf had on a purple collar. The same type that OR-93 was fitted with in June 2020 and was being tracked by the Oregon Department of Fish and Wildlife (ODFW). Unfortunately, that collar stopped transmitting in April.

California wildlife officials sent staff to inspect the sighting areas and confirmed recent wolf tracks in the vicinity. Currently, neither California nor Oregon officials can determine the wolf’s current location. CDFW officials detailed that if an opportunity arises, staff “may attempt to capture and re-collar the wolf to continue tracking its journey.”

The wolf wandered into Calaveras and Tuolumne counties in February, where he was tracked to be between Highways 108 and 4. He visited Tuolumne County a second time in March, shortly before the tracking collar’s signal went out. At that time, wildlife officials relayed that they knew he was inside the county but could not pinpoint his position.

The last collar transmission was from San Luis Obispo County on April 5. During the time OR-93 was being tracked, he racked up at least 935 miles in California, a minimum average of 16 air miles per day, relayed CDFW officials. After losing track of the wolf, in August, CDFW received trail camera video from May 15th showing a collared gray wolf in southwest Kern County that may have been OR-93, according to wildlife officials. They detailed that the trail camera records wildlife using a water trough on private property, adding that the delay in time getting the video was because the camera was not checked until August.

Gray wolves are listed as endangered pursuant to California’s Endangered Species Act. It is unlawful to harass, harm, pursue, hunt, shoot, wound, kill, trap or capture gray wolves. Anyone who believes they have seen a wolf in California can report it by clicking here.