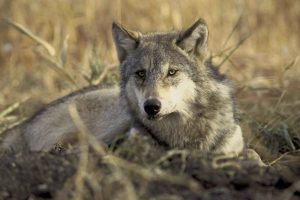 Tuolumne, CA – A one-year-old male gray wolf has journeyed back into Tuolumne County.

Today, the California Department of Fish and Wildlife (CDFW), confirmed through his collar, OR-93, that the canine is currently roaming inside the county, but did not pinpoint his exact location. The last time the wolf made a rare appearance in the county was the end of February, which was the first time a gray wolf had entered the county. At that time, he was noted to be in the area between Highways 108 and 4, as reported here. CDFW noted that he is a relation to the White River Pack out of Oregon.

In a written press release, county officials remind the public that “gray wolves are covered under the Endangered Species Act in California. It is unlawful to harass, harm, pursue, hunt, shoot, wound, kill, trap, or capture gray wolves.”

It is also noted that the canines “pose very little safety risk to humans.” County officials advise that if one is encounter do not run, maintain eye contact and make noise while retreating slowly.