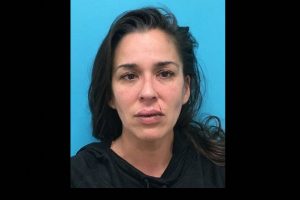 Groveland, CA – After begging to come into the victim’s home, a Groveland woman was arrested for then allegedly beating the homeowner.

A call came into Tuolumne County Sheriff’s dispatch recently for a reported physical altercation at a Groveland home in the 20000 block of Lower Skyridge Drive. When deputies arrived, the victim, who had visible injuries to her head and face area, was waiting for them. The victim says that 43-year-old Amy Alvarez showed up unannounced and drunk. She added that Alvarez wanted inside, but at first, she said no. After repeatedly being asked to come into the home, the victim says she finally allowed Alvarez inside but on one condition that Alvarez would only stay for a short time.

The victim told deputies that when she asked Alvarez to leave a little later, the suspect became agitated and physically attacked her, pulling clumps of hair from her head. Sheriff’s officials detailed that Alvarez then allegedly punched and kicked the victim in the head and face area while she tried to call 911.

Deputies found Alvarez inside a vehicle in the victim’s driveway. She was arrested for battery with serious bodily injury and placed on a $50,000 bail. It is unclear what the relationship is between the two women.