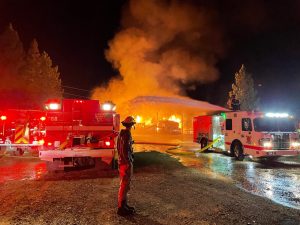 Update at 9:05am: Fire officials have contained a structure and vegetation fire at the Hatler Mill in the 13000 block of  Big Hill Road. We reported earlier that it ignited shortly after 2:20am. Initial responders found a building fully engulfed in flames that was storing a large amount of lumber. It was a challenge to fully contain given all of the wood inside. The fire also burned approximately ½ acre of nearby vegetation. There were no injuries reported and the cause of the blaze remains under investigation.

Original story posted at 6:20am: Sonora, CA — Numerous officials responded to a fire that broke early this morning on the Hatler Mill property on Big Hill Road in Tuolumne County.

The fire was reported just after 2:20am, and firefighters are still on scene this morning working to fully contain and mop up the incident. There has not been a full damage assessment to this point. No injuries have been reported, and the cause of the blaze remains under investigation. Be prepared for activity in the area. Tuolumne County Fire reports that travelers need to use caution on Big Hill Road this morning because there is a large diameter hose coming off a fire hydrant into one of the traffic lanes. Use caution, and avoid the area if you can.