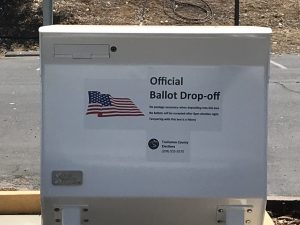 Sacramento, CA — Governor Gavin Newsom Signed election legislation today making universal vote-by-mail ballots permanent. The measure, AB 37 will send a vote-by-mail ballot to every active registered voter, it was authored by Assemblymember Marc Berman of Menlo Park. Calaveras joined Tuolumne and Amador in 2019 as detailed here to allow permanent voting by mail. Several other states, such as Colorado, Hawaii, Nevada, Oregon, Utah, Vermont, and Washington conduct all-mail elections. Statewide in California, the practice of sending vote-by-mail ballots to every registered voter first began in 2020, and was extended through 2021, due to COVID-19 pandemic disruptions and it resulted in record voter participation.

Secretary of State Dr. Shirley Weber added, “Vote-by-mail has significantly increased participation of eligible voters. Voters like having options for returning their ballot whether by mail, at a secure drop box, a voting center or at a traditional polling station. And the more people who participate in elections, the stronger our democracy and the more we have assurance that elections reflect the will of the people of California.”

Governor Newsom also signed SB 35 authored by Senator Tom Umberg (D-Santa Ana) making changes to the distance within which electioneering and specified political activities near a voting site are prohibited; AB 1367 by Assemblymember Evan Low (D-Campbell) increasing penalties for the personal use of campaign funds to up to two times the amount of the unlawful expenditure; and SB 686 by Senator Steve Glazer (D-Contra Costa) requiring a limited liability company (LLC) that is engaged in campaign activity to provide additional information regarding the members and capital contributors to the LLC.