One Arrested, Another Suspect Still On The Run 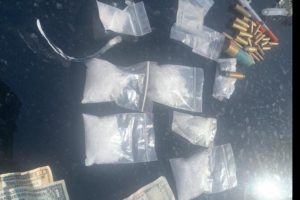 Sonora, CA – A Mi-Wuk Village woman already wanted on a felony warrant stemming from a DUI crash with her toddler in the vehicle was arrested on drug charges yesterday – the man with her remains on the loose.

While patrolling the area of Microtronics Way and Camage Avenue, near Tuolumne Road, in Sonora Wednesday (Sept.22) morning, a Tuolumne County Sheriff’s Deputy came across a man and woman digging through a dumpster.  The male took off running, but the female, 33-year-old Stephanie Foster of Mi Wuk Village, stayed put. Sheriff’s Spokesperson Nicco Sandelin relayed that during questioning, Foster admitted to having a warrant for her arrest. It involved a DUI crash in March where her pickup hit a Kiosk at the Indian Rock Center on Mono Way in East Sonora while her one-year-old daughter was in the truck, as detailed here.

It was determined that the first bag belonged to the male and the second to Foster. She was arrested for her felony warrant, possession of heroin, and possession of methamphetamine. While deputies combed the area for the male suspect he was nowhere to be found. Sandelin added, “Due to the investigation, the identity of the male subject is not being released at this time.”