DUI Crash With Toddler In Vehicle In East Sonora 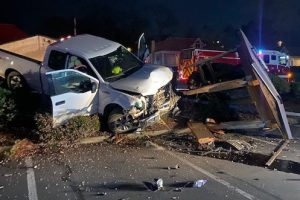 East Sonora, CA – A one-year-old girl was lucky to have escaped injury after the pickup she was in smashed into a bus stop – arrested for DUI, the toddler’s mother.

The wreck happened around 8:20 p.m. on Mono Way in East Sonora. The CHP reported that 33-year-old Stephanie Foster of Mi Wuk Village was driving a 2015 Ford F-150 truck westbound when the pickup drifted off the roadway. It then went over a sidewalk, crashing into a bus stop kiosk in front of the Indian Rock Center.

Officers found the toddler in a child seat, but CHP spokesperson Steve Machado noted one problem, “The fact that the child was found to be improperly restrained in the child seat. It was very, very fortunate. She is extremely lucky that the child was not injured. If the child were, there would be felony DUI charges.” The little girl was released to the care of the Child Welfare Services.

While heading to the Tuolumne County Jail officers discovered Foster had Methamphetamine and Heroin hidden on her. She faces DUI, felony child endangerment and drug charges.