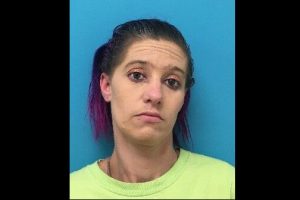 Jamestown, CA – Patrons of the Royal Carriage Inn on Main Street in Jamestown were shocked to find the hotel surrounded by deputies and over a loudspeaker ordering a suspect to come out of a room.

It happened Friday evening when Tuolumne County Sheriff’s dispatch got a report of a domestic abuse incident involving a stabbing. Once on scene, deputies found the male victim in the parking lot with a stab wound to his shoulder. Still believed to be inside a hotel room was the suspect, 33-year-old Amy Hughes of Jamestown, detailed Sheriff’s spokesperson Nicco Sandelin. He added that deputies established a perimeter around the hotel room and several attempts were made to contact Hughes.”

Meanwhile, Sandelin noted, that a review of security camera footage discovered Hughes had not gone back into the room but fled the scene prior to deputies arriving. A searched of the area ended without any sign of Hughes.

Further questioning of the victim revealed that he was holding a child when the couple started arguing. Sandelin relayed that as the victim began to walk away, Hughes allegedly grabbed a pair of scissors and stabbed the victim in the shoulder. Luckily, the victim sustained minor injuries and the child was not hurt.

Hughes contacted the sheriff’s office the next day, Saturday (Sept. 18), and met with a deputy for questioning. Subsequently, she was arrested for assault with a deadly weapon, domestic battery, and child endangerment and placed on a $40,000 bail. It is unclear the child’s relationship to Huges and what the couple was arguing about.