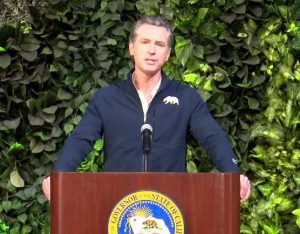 Sacramento, CA —  Declaring California to be a “reproductive freedom state” while drawing a sharp contrast with Texas and its efforts to limit abortions, Gov. Gavin Newsom signed two laws aimed at protecting the privacy of abortion providers and their patients.

One is a law that abortion rights groups believe is the first of its kind in the country, making it a crime to film people within 100 feet of an abortion clinic for the purpose of intimidation. Another law makes it easier for people on their parents’ insurance plans to keep sensitive medical information like abortions secret.

A new Texas law bans abortions once a heartbeat is detected, which is usually around six weeks, and allows anyone to sue anyone who performs or aids in an abortion. The U.S. Supreme Court decided to let the law take effect, for now, banning most abortions in the state.

“These are dark days. I don’t think one can understate the consequential nature of the moment that we are living in,” criticized Newsom. “It becomes of outsized importance that California asserts itself.”

Although it is already illegal in California to post personal information about abortion providers or their patients online, that law hasn’t been updated since the mid-2000s, before smartphones, which can rapidly post to social media websites. The new law makes it a misdemeanor to film someone without their consent for the purpose of intimidation. Offenders can be punished by up to one year in county jail, a fine of up to $10,000, or both. Regarding its enforcement, the law also requires extensive training for law enforcement agencies on how to enforce it.

In a letter to lawmakers, the Pacific Justice Institute, a conservative legal defense organization opposed to the law wrote that violence is “outside the bounds of legitimate political discourse regardless of who perpetrates it.” The letter went on to state,
“At the same time, spirited debate must not be punished or stifled by merely relabeling it as intimidating or threatening, based on the viewpoint of the speaker.”