Speeding Played A Role In Fatal Crash In Groveland 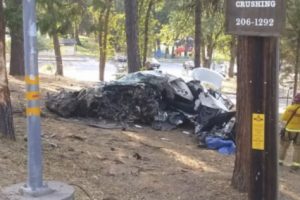 Groveland, CA – A vehicle versus tree crash on Highway 120 in the Groveland area yesterday afternoon resulted in the death of a 24-year-old Westland, Michigan man.

CHP spokesperson Steven Machado tells Clarke Broadcasting that speed was a factor in a crash near Ferretti Road just after 3 p.m. on Wednesday. Although Machado could not say whether the vehicle’s speed was over a hundred miles per hour at the time of the collision, he confirmed that it was traveling at “a high rate of speed.”

The man was driving a 2001 Nissan Altima westbound on the highway. Machado details, “The driver allowed his vehicle to travel off the roadway and onto the north shoulder. Before the driver could bring his vehicle back onto the roadway, it crashed into a tree and landed on its wheels.”

The driver was pronounced dead at the scene. While it was determined the driver was wearing his seatbelt at the time of the crash, Machado added, “It is unknown at this time if drugs and/or alcohol were a factor.”

The deceased name is not being released pending notification of family. The crash is under investigation.