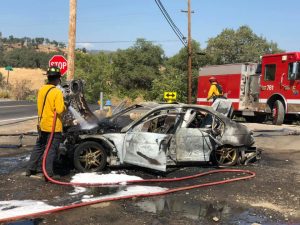 Sonora, CA — A vehicle caught on fire along Highway 108 yesterday afternoon in the area of Wigwam Road.

The CHP reports that an unidentified 90-year-old woman was driving a 2009 Mercedes eastbound when she ran over a plastic bag filled with trash on the highway. It became lodged under the vehicle and ignited on fire. An observant motorist noticed the fire starting and urged the woman to pull over. She then turned into an empty lot near Lime Kiln Road, and exited the Mercedes, along with her only passenger.

The vehicle became fully engulfed in flames and it was quickly extinguished by arriving firefighters. The CHP reports that thankfully she pulled into a brush-free lot so the fire did not spread to any vegetation. The vehicle was destroyed, but there were no injuries reported.

The incident happened at around two o’clock on Tuesday.