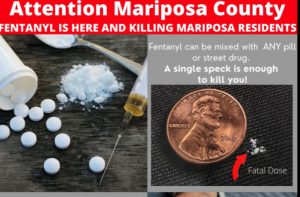 Message from Mariposa Sheriff's Office on fentanyl found in the county

Mariposa County, CA – The Mariposa County Sheriff’s  Office is warning the public about the deadly drug fentanyl being found in both laced-in-marijuana and in pill form. 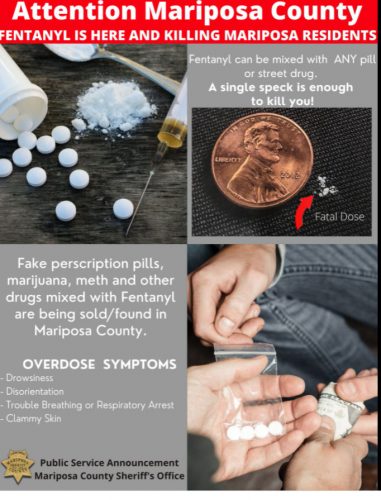 The warning, posted on social media last month and found here, states that fentanyl is a very serious drug, and a single speck is enough to kill you. Sheriff’s officials detailed that deputies have  specifically seen it “mixed with marijuana and smoked as well as in pill form.” They added, “Our stance is and always has been to say no to drugs, however, this drug continues to plague the nation with drug dealers preying on drug users.  Please be aware of the drugs you are using!”

It is not the only county being impacted by this lethal opioid, just Thursday night a correctional officer at the Calaveras County jail was possibly exposed to fentanyl, and a female inmate from Murphys was reported to have overdosed. As reported here, the inmate admitted to “smuggling fentanyl” into the jail and using it. A counter drug to the opioid, Narcan nasal spray, had to be administered to both, who were treated and released. To determine if the white powdery substance was fentanyl, it has been sent to the Department of Justice to be analyzed.

Calaveras Sheriff’s spokesperson Lt. Greg Stark tells Clarke Broadcasting that deputies carry Narcan. He specified, “We’ve used it on the streets about six times in the past several years.”

Regarding whether fentanyl has been found in Tuolumne County, sheriff’s office spokesperson Nicco Sandelin advised, “I have not heard of any specific local cases related to fentanyl-laced drugs recently, but deputies were made aware of the dangers associated with Fentanyl and its use or presence in other drugs over the last several years.”

Whether Lt. Stark thinks the opioid could become a bigger problem in the Mother Lode, he disclosed, “We haven’t seen a significant increase in fentanyl in the county. That doesn’t mean it can’t come here. We would just urge anybody if they have any substance abuse issues or challenges that they seek help because honestly, they don’t know what they’re getting and their next dose could be their last.”