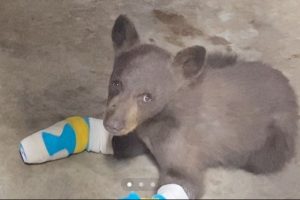 Sonora, CA – A Markleeville resident forced to evacuate their home due to the flames from the Tamarack Fire burning in Alpine County discovered something sad in their back yard upon their return home Sunday night.

The homeowner found a bear cub with its paws so badly burned it was walking on its elbows. They immediately called the Lake Tahoe Wildlife Care center for help. When rescuers went into the backyard, the frightened cub tried to climb a tree but couldn’t due to its wounds.

Once at the wildlife center, a veterinarian wrapped the bear’s burned paws and gave him painkillers. It was decided to let the wounds heal to a certain point and then a skin graft treatment would be done to speed the healing process.

The first picture below shows the initial burns and the second shows how the wounds have healed so far.

The little guy has been named “Tamarack” after the fire that he was lucky to survive. That fire is currently 68,393 acres and overnight went from 54% containment to 59. The blaze was ignited by lightning in Alpine County, California on July 4th and has spread into Nevada.

Tamarack is estimated to be 5 or 6-months-old and weighs 21 pounds. Center officials say when they captured him, he was “underweight and dehydrated,” but otherwise in pretty good condition. They estimate keeping the bear through winter and releasing him in the spring.