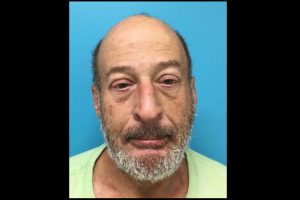 Sonora, CA – Several witnesses shocked by what they were seeing called 911 to report a man repeatedly striking a dog in East Sonora on Mono Way last Friday.

Once on scene, witnesses directed the deputy to the Arco am/pm gas station. Inside he found the man with two dogs and asked him his name. Initially, the suspect gave a false identity, but was eventually identified as 57-year-old Edward Rodriguez of Sonora and was detained for questioning.

Witnesses recounted that Rodriguez while holding one of the dogs down on the street was striking it with both a belt and closed fists as the dog yelped and cried. They added that this went on for several minutes despite several yelling at him to stop. They say once the beating was over, Rodriguez put the belt around the pooch’s neck, using it as a leash,  yanking it, and allegedly choking the dog.

Rodriguez also had several outstanding warrants for motor vehicle violations, including driving while his license was suspended for DUI. He was arrested for those warrants, animal cruelty, and providing false ID to a law enforcement officer.