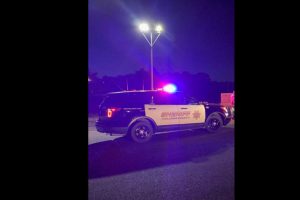 Jamestown, CA – A driver’s erratic driving got a vehicle pulled over on Highway 108 in Jamestown by a Tuolumne Sheriff’s Deputy, but it was the passenger that got arrested.

The deputy also checked the vehicle’s registration and found it was suspended. He conducted a traffic stop finding 37-year-old Sabrina Rivette of Sonora behind the wheel and 49-year-old Jerome Zylstra of Columbia a passenger. A record check revealed Rivette had misdemeanor warrants for her arrest.

Rivette consented to a search of the vehicle that turned up over 28 grams of methamphetamine separated into different quantities, cash, packaging material, drug paraphernalia, and brass knuckles. Through questioning it was determined all those items belonged to Zylstra. He was arrested for possession of drugs for sales and paraphernalia, and the brass knuckles, which are illegal to have in California. His bail was set at $30,000.

Rivette was issued a citation for her warrants and released at the scene.