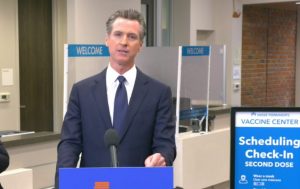 Sacramento, CA — Governor Gavin Newsom received criticism after a group obtained a picture of his son attending an indoor basketball camp in which masks were not being worn.

The Governor’s Office reports that two of Newsom’s children were attending the camp, and he has now pulled both of them out because it is in violation of state policy. A spokesperson for the Governor said he and his wife missed a communication from the camp noting that masks were not going to be required.

The action by Newsom came shortly after the group Reopen California Schools tweeted that it had received a photo of one of Newsom’s children at the camp. The organization is lobbying for a full reopening of California schools without any restrictions. The group argued that Newsom continues to say one thing while doing another. He also came under fire attending a group dinner at the French Laundry restaurant early during the pandemic.

The state’s directives currently require masks in youth settings because the vaccine is not available for kids under 12 years of age.