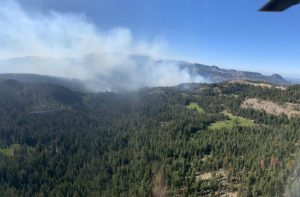 Yosemite, CA — Officials continue to fight wildfires that were ignited by lightning strikes in late June in Yosemite National Park and the Stanislaus National Forest.

The largest is the Henry Fire in the Carson Iceberg Wilderness of the Stanislaus National Forest, northeast of Spicer Reservoir. It is burning at an elevation of 7,500 feet. The fire is 1,320 acres and 90-percent contained. Forest Service officials report that full containment should come in the next couple of days.

In Yosemite, the Lukens Fire is situated north of Tioga Pass and west of Lukens Lake. The elevation is 8,243 feet. The fire is 466 acres and 50-percent contained.